Two weeks in the Canadian Rockies 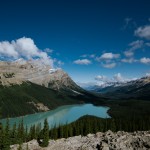 For those who know my background, it is not the first time I had the chance to spend some good time in the Canadian Rockies; aka Banff/Jasper & all.

For the others, a simply reminder that my boyfriend and I were working in Alberta for two years after school. We used to live in Fort McMurray (850km from Jasper) and I also spent a couple months in Calgary. So there are some places, such as Lake Louise, that we have been like 5 times in summer, spring & winter (we even skated on the lake). So we decided not to return, so as a lot of others places around Banff that are worth it too.